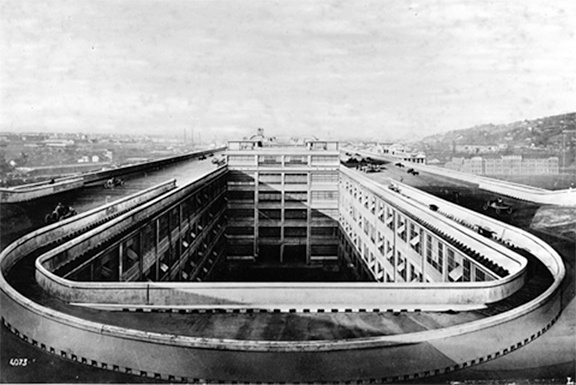 There are other circles – besides Apple’s Big One – forming in Silicon Valley these days. Observe, first of all, the fact that the company’s expansion is also a kind of return: Apple’s new campus is being built on land acquired from Hewlett Packard, where Steve Jobs got his start as a thirteen year old summer intern. And the 3.1 million square foot circle that Norman Foster has designed for Jobs produces another historical loop. Its functional simplicity and repetitive factory-like floor plans recall an earlier era of modernism, one very much ancestral to the high tech aesthetic on which Foster has built his reputation.

For Foster’s generation of modernists digital technology is both metaphor and model, just what industrial technology – epitomized by the automobile – was for the first generation. Like Giaccomo Trucco’s work for Fiat in the second decade of the twentieth century, Foster’s project for Apple in the second decade of this century puts architecture in direct contact with its archetype. Le Corbusier, more than anyone, valorized this link between architecture and technological production and set both in the context of standardization. In Vers une Architecture he writes that standardization enables “a manifestation not only of perfection and harmony, but of beauty". He supports his observation with an evolutionary series of car photos – clunky becoming sleek – and ends the book with pictures of Fiat’s rooftop test track: the four-wheeled products gliding in an infinite loop against the Italian sky.

As an architectural method, Le Corbusier’s formula – develop, test, iterate – is still relevant, even as it arouses a steady stream of suspicion from critics. Reyner Banham in an essay about the Fiat factory titled “The Phantom of Order” claims that in some respects the building was dead on arrival, “a memorial to a myth of modernity". He points out that although Trucco’s model was Ford’s concrete factory complex in Highland Park, by the time Fiat was built Ford had abandoned multistory urban structures for more efficient metal sheds laid out in single-story rows on cheap suburban land. Despite the rhetoric of iterating toward perfection, efficiency and problem solving aren’t the critical factors in Fiat’s architectural triumph. Its fame comes from what you notice in the pictures: the structural grace of the spiral ramp and the questionable, but daring, logic of the rooftop track. In short the building works not because of its fidelity to the economic process, but because of what it gets away with despite the economic process.

So don’t look for economic efficiency in Foster’s circle. Like car production, gadget design obeys an economy beyond architecture. In Cupertino commerce moves forward seeking competitive advantage, while architecture’s attempt to keep up looks more like circling back. If the snug fit with efficiency is allowed to loosen, revealing (perhaps) tectonic exuberance or (hopefully) programmatic invention, Foster’s project might be successful. Think of it as another opportunity for architecture to beautifully flaunt efficiency, and now with the benefit of hindsight. After all we’ve been here before, and feedback loops gather information with every cycle.